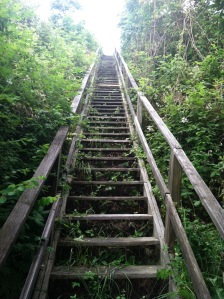 Scrolling through Facebook this morning I saw, thanks to that tenuous way we all are now “connected” to people from our past, that my parents’ best friends from when I was growing up, the Kellys, are selling their house.  There it was in my feed, a picture of the house, so familiar, taken from the front, a way we would never enter.  We would always go around the back, through the kitchen door, which was never locked.  Nor were any of the other houses on the hill where I grew up, large Victorians mostly, lived in by working class people in the town of Hull on the South Shore of Boston.  The Kelly’s house with Mrs. Kelly’s floral upholstery and the witch’s hat roof, where I babysat Brian and Rachel and later baby Eoin; the Carlson’s house with the cork wall in the dining room and a smell I associate with the 1970’s (eucalyptus?); the Ciulla’s house, home of my best friend Tracy, where I could watch commercial television (forbidden at my house where PBS reigned supreme) and everyone had a bedroom but no one slept in their own bed; my house with it’s unfinished wallboard walls and no central heat and (eventually) a coal burning stove in the kitchen.  And there were the summer people who came down from Boston (we lived in a beach town) – the Lewenbergs and Hennessys and what was the name of the family who lived next to the Hennessys?

So much of who I am comes from this place.  I wonder if everyone is like that or if it’s particular to our hill in the Village at the end of the spit of land that is Hull.  We grew up, my siblings and I and all the other kids from the Village, roaming the hill and the rocky beaches. In the summer we ran at top speed over the jagged pieces of rock that made up our seawall, knowing every loose one.  And we swam when the tide was high at the jetty or Sally’s Rock or to the raft at the bottom of the steps.  And we rode our bikes down the steep hills, no helmets, almost always an extra kid on the handlebars, never touching the brakes.  In the winter when we were lucky enough to get snow we went sledding down the hill next to my grandparents’ house or ice skating in the park which the fire department flooded when the weather turned cold giving us an irregular circle of bumpy ice, grass and sticks poking through.  We ran in packs, playing relievio and having territorial “wars” and hiding in the stacks of rafts at the end of James Ave.  We did all of this with no parents in sight, but someone’s mother always at home, just in case.

I’ve created my own family here 3000 miles away from where I was born.  I have now lived in San Francisco for as long as I lived in Hull.  In the last year my Little Sister moved from Baltimore and now lives a block away.  I’m so happy to have her close, expanding my SF “family” with an actual blood relative.  In my imagined future both of my Daughters will also live on this hill that I now call home with their own families.  In my imagined future my grandchildren will run on this hill and into the enormous wilderness of McLaren Park where they can play like we did growing up.  I did not give my Daughters this freedom.  My Daughters grew up in the era of the “helicopter parenting” when we bubble wrapped our kids for fear of them getting physically or emotionally hurt.

Recently I have seen groups of kids, elementary aged kids, walking down my sidewalk together and heading into McLaren, without parents.   Is the pendulum swinging back?  Are we starting to remember that children need time without grownups, time to make mistakes and skin knees and be mean to each other and kind to each other and learn on their own how to be people in the world?  I hope so.

Daughter 1.0 has gone far away to college and she threatens to never live in San Francisco again.  Daughter 2.0 will follow in less than two years, planning to go even further away.  My parents haven’t lived in my childhood house for almost a quarter century.  I rarely go back to the town in which I grew up because no one in my family lives there now.  But sometimes, in some weird way, my life now feels like make believe, like I’m playing grown up until I get to go back home and the Kellys will be over for Thanksgiving breakfast and my grandmother will make Susan Stamberg’s cranberry relish with horseradish and at Christmas we will cover our Charlie Brown Christmas tree (hauled back from my grandparents’ place in Vermont) with sugar cookies baked rock hard.

My father would sometimes add a can of tunafish to this, making it tuna casserole.

Melt the butter in a large saucepan over medium heat.  When the foam starts to subside, add the flour, whisking together.  Cook, whisking, for about 2-3 minutes then slowly add the milk, whisking constantly.  Allow the mixture to come almost to the boil so that it thickens (continue to stir so it doesn’t burn on the bottom).  Add the grated cheese and stir to melt.  Add salt and pepper to taste.  Turn off the heat.

Preheat the oven to 375 degrees.

Cook the macaroni in boiling salted water according to package instructions.  Drain and stir into the cheese sauce.  Transfer the entire contents to a buttered casserole dish and bake in the oven for 35 minutes, until the top is brown and bubbling.

If you want a more modern variation use different types of cheese (Gruyere, drunken goat, fontina or any combination you want to try!)

This entry was posted in Uncategorized. Bookmark the permalink.