We have considered your application … 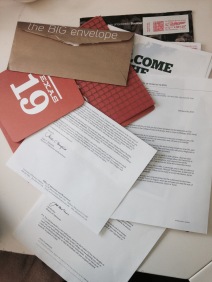 It’s that time of year again, thin envelope, thick packet time (or not even anymore, now it’s website checking, system crashing time).  The time of year when countless children, from preschool to high school, and their doting, anxious parents await the news of which hallowed institution, from public kindergarten to elite private college, want them.  Ok, maybe those 5 year-olds aren’t waiting with baited breath, but certainly they can feel the tension when mothers cry and fathers rage (or fathers cry and mothers rage) about a school assignment in the Bayview when they live in the Outer Richmond (look it up on a map, it’s far, far away, in more than one sense of the word).

And so it is at our house.  I wrote a few weeks back that Daughter 1.0 found out she was offered a spot at one of her first choice colleges.  Daughter 1.0 didn’t have a top, top choice, at least not one she would admit to.  She has been somewhat guarded about this college process, protecting herself from disappointment.  She decided early on that she had no interest in the spring-of-Junior-year college tour.  She didn’t want to visit a school, fall in love, only to find out the school didn’t want her, that she wasn’t one of the distinguished 6000 students offered a spot out of the 100,000 applicants.  She didn’t want to trust her heart to what often amounts to a lottery.  Smart girl.

This attitude was born of the gut-wrenching experience of applying to high school.  In San Francisco kids apply for high school, even public high school has an application process.  Daughter 1.0 is an excellent student (yes, I’m bragging, but it is all her own doing; she works harder that anyone else I know).  In 8th grade she had her sights and heart set on a big Jesuit high school in the City.  She wanted to go there because it was the place in San Francisco that most closely resembled high school on TV.  Big! Lockers! PA system! Football! Homecoming!  I was not entirely sold on said high school, but it’s a good school; she would do well.  Given her grades, Daughter 1.0 seemed a shoe-in. OK, we are not practicing Catholics (only two out of four of us are Catholics at all) but Daughter 1.0 was baptized and my Husband had himself gone to Jesuit high school in LA, he had connections.  It seemed a no-brainer.  So certain were we of her acceptance that I planned a ski trip away with friends the weekend that the admission letters arrived.  I didn’t want my less that thrilled attitude about her choice of high school to color her joy.

Halfway to Kirkwood (best snow in Tahoe!) driving slowly through a snow storm, I got the call.  No thick packet.  Rejection.  Daughter 1.0 had locked herself in her room and was threatening to quit school all together.  My Husband couldn’t believe I wasn’t home.  The snow piled up behind us as we drove Northeast.  By the time we reached Kirkwood the road home was closed.  My Husband would have to deal with this crisis on his own, which he did, very well, with the help of a dedicated and kind high school counselor at Daughter 1.0’s middle school, a smart swim coach and some very good looking male high school swimmers.

Daughter 1.0 ended up at the high school my Husband and I preferred.  It has been a hard school, pushing and stretching her in ways the other school would not.  It’s been good for her.  It was Warren Buffet, wasn’t it, who wrote about the value of the thin envelope? There is value in letting go of the school that doesn’t want you and embracing the school that does (Mr. Buffet’s example has to do with getting rejected from Harvard and admitted to Columbia, not exactly a hardship, but still).

I thought Daughter 1.0 had internalized this lesson.  And when she called me to tell me that she had been offered at spot at that top choice school she cried, tears of joy.  We could all breathe a sigh of relief, raise our arms in victory, and move on, right?  Except, well, she wanted to wait to hear from the other schools, she said.

I did put all that effort into those other applications, I feel I deserve to find out if they want me.  I mean, I’m 99% sure I’ll go to that school, but still …

And so she has endured more rejection, and tears, and heartbreak, in this inexplicable, throw spaghetti at the wall, college process.  And maybe that’s not a bad thing.  She’s finding out she can survive disappointment. And we know life will be full of disappointments.  As parents we do our best to protect our children, from emotional as well as physical hurt.  It is so hard to let our children try, knowing they are likely to fail. But how will they ever survive in the “real” world if they never experience hurt?  We are raising bubble-wrapped kids, where everyone’s best is THE best.  But how can that be so?  Daughter 1.0 is a remarkable, and also flawed, young woman.  Not every place will want her, not every goal she sets will be achieved, she won’t always win, and that’s ok.  It turns out life can still be pretty good, even when you don’t go to Harvard.

Mussels and Clams with Chorizo

I made this last Friday night for my Husband and me (kids were out).

This is a cleaning method for clams and mussels that I learned from the Terra Restaurant Cookbook. It’s very effective.
As soon as you get home from the market, put the mussels in one bowl and the clams in another. Add a handful of salt to each of the bowls and shake the shellfish to begin the cleaning process. Rinse the clams in cold water then cover them with fresh cold water, adding a healthy amount of salt. Put the clams into the refrigerator for an hour. Rinse the mussels in cold water, removing any barnacles stuck to the shell, but leaving the beard intact. Cover the mussels with a wet dishcloth and put into the refrigerator until ready to cook.
Pour a couple of tablespoons of olive oil into a large heavy saucepan or dutch oven. Add the sliced white parts of the spring garlic and saute over medium heat until soft. Add the chorizo to the pan, breaking it up with a wooden spoon. Cook until the choizo is done and starting to caramelize a bit. Add the saffron and stir the pan. Pour in the wine and allow to bubble while you get the mussels and clams ready.
Remove the clams from the fridge and drain and rinse a couple more times under cold water. Discard any clams that are open and don’t close when run under water. Add the clams to the pot and cover. Turn up the heat to high.
Remove the mussels from the fridge and pull the beard away from the shell by gripping it and firmly pulling it back and forth until it gives way. Discard any mussels that are open. Add the mussels to the pot and cover. Cook until all the mussels and clams are open (this should only take a few minutes), discarding any that do not open.
Cut thick slices of the country bread and put into the bottom of a wide bowl. Ladle the mussels, clams, chorizo and broth over the bread. Sprinkle with the chopped green tops of the garlic and serve.

This entry was posted in Uncategorized. Bookmark the permalink.